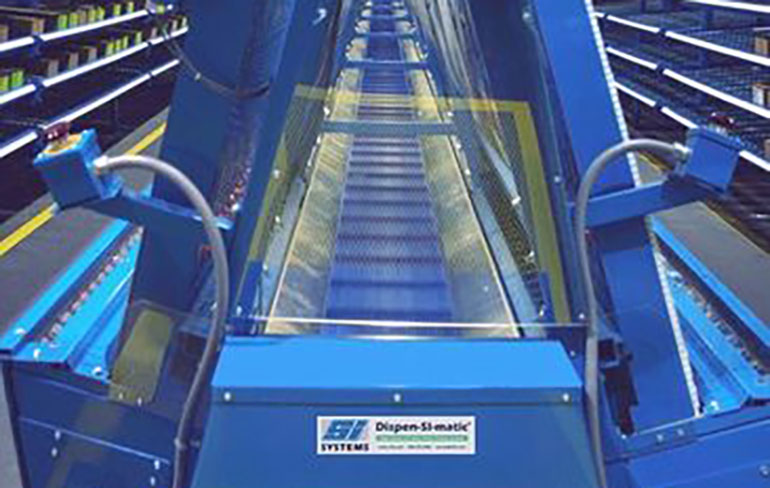 When taking your order fulfillment performance to the next level it’s all about:

These improving metrics help turn a warehouse from operating overhead to a profit center.

What and how much risk are you introducing to an operation and what are the true benefits? The common thought is the more automated a facility, the more downtime is possible.

In some automated technologies, this is can be true, (single point of failure) but for other technologies such as an A-Frame, the system keeps producing (short of a facility power outage).

An A-Frame dispenses inventory into a passing open order shipper, belt position or tote at up to 4,200 orders per hour (not lines, but orders) with zero picking labor. The throughput is great, but the key benefit is the uptime and reliability the system provides.

If an A-Frame were to experience a hardware problem, it would likely be a component in a channel’s dispenser. Because a system can have up to 2500 dispensers (one for each channel), if any dispenser were to fail, it simply means one SKU position didn’t dispense but all other dispensers in the A-Frame are still performing.

Every dispenser has three sensors to detect a problem. If a sensor detects a problem, it is instantly communicated to the A-Frame controls. The controls then instantly flag that specific order.

If an order is flagged, the A-Frame controls either:

Any dispenser issue is immediately reported to the controls. The A-Frame’s controls instantly logs and reports the failure to the supervisory station. An operator is then immediately dispatched to check on product blockage or damage that may have created the failure and to correct the problem. If it’s not a product issue and truly a dispenser hardware issue, within 15 minutes, a new dispenser can be mounted and fully operational.

Another channel with the same SKU is used while the dispenser is being changed. The A-Frame never stops running: orders keep getting filled and zero productivity is lost!

This is a major differentiator between A-Frame automation and other technologies. The eliminated labor, unsurpassed levels of throughput, accuracy, uptime and reliability, make the A-Frame a logical warehouse automation tool.